As generally accepted Crete was first inhabited from the 7th millennium BC. The first settlers probably lived by hunting and fishing and later started primitive agricultural activities. First findings of inhabitation however date from 5th millennium of hand-made ceramic pottery. Good climate and fertile ground where also then well appreciated! They lived in the coastal area’s before moving into higher spots. Slowly the number of inhabitants increased and they founded villages and small towns.
But with recent excavations in the area of Plakias they discovered stone tools dating back 130.000 years ago! So Crete might have even been inhabited centuries earlier by pre home sapiens that probably came over from Africa.

Around 3000 BC the civilization developed rapidly and brings us to the Minoan period, the very first civilization of Europe and way before the well-known Hellenistic period (500-300BC)! A chronology based on the palaces' destruction and reconstruction brings 4 periods: Pre-palatial (2600-1900 BC), Proto-palatial (1900-1700 BC), Neo-palatial (1700-1400 BC) and Post-palatial (1400-1150 BC). Not much evidence is found about the pre-palatial period. There where important settlements in Myrtos and Mochlos and the Minoans had trade with Egypt, Asia Minor, and Syria. There were no important landlords but small scaled settlements. Pottery making flourished and copper and later bronze began to be worked.

This changed during the proto-palatial period when there were more migrations from mainland Greece and Minor Asia. Local elites developed and first palaces raise and acted as a central function for their local communities. Probably there was a hierarchy in the classes, nobles, peasants and perhaps slaves. The trade with Egypt and Asia continued and the Minoans even started settlements outside Crete as in Rhodes, Thira (Santorini) and Milos. Also writing was used in the form of hieroglyphics, probably coming the connections with Egypt. It’s assumed that this writing was base of later Lineair-A, still not deciphered. The disk of Phaistos is a great preserved example of this writing and can be seen in the Archeological Museum in Heraklion.

The palaces where abruptly destroyed in the 17th century BC, probably by earthquakes for the Minoan period flourished and continued into the neo-palatial period. After the destruction of the palaces, new palaces rose but larger and more complicated with at least 2 stories and lots of storage rooms. Knossos was the most important palace by size and grandeur. But there where many more palaces like the one’s excavated in Zakros, Malia and Phaistos. The palace of Knossos was of great luxury with drainage systems and a bath and flushing toilet for the queen. It was the house of King Minos, said to be the son of Zeus. Also in smaller settlements they build larger houses called villas with also storage and work areas. Between settlements there was extensive trade throughout the island and roads where paved. It was probably the peak of Minoan civilization with beautiful pottery, jewels and painting.

The influence of the Minoans reached also outside Crete and they were well appreciated because of their fine arts and pottery. It must have been a period of relative peace (or strength with naval forces) for the palaces show no signs of fortification. It’s in the late neopalatial period that the Minoans meet upcoming influence of the Mycenaean’s from the Peloponnese. By about 1500 BC a new form of writing, called Linear Β arises and is mainly used for administrative purpose and trade and not for poems or literature. Archaeologists have recognized it as Greek and it even might have come from the Mycenaean’s. It starts a period also referred to as the dark ages for the influence and importance of Crete more or less vanishes. The quality of Minoans fine arts and craft disappears and becomes more rough and clumsy. With the Dorriers occupying the island, armed with iron weapons, many inhabitants seek refuge in desolated places. In those years they also start settlements mountainous places like Karfi, Flektro, Kastro by Kavouss, etc. Poverty and lack of food brings Crete to a period of disunity and fights and wars between cities. Population starts to decline.

All of Greece was immersed in the dark ages till around 800BC. It where mainly the Phoenicians that dominate the Mediterranean with trade. But slowly live starts to improve and population grows, especially in the West of Crete. The cities of Knossos, Arkades, Kydonia, Dreros, Gortyna, Lato, and Lyktos become the most important centers of the island which continues to trade with Cyprus, Syria, and the Aegean. Cities made alliances with each other and kept fighting other cities. It’s in the 2nd century BC that the city of Lapa makes an alliance with Lyttos to fight Knossos. But Knossos destroys Lyttos and the inhabitants shelter in Lapa.

It was also a period that pirates could use and hide at many places in Crete. As Crete lost power as a nation, it where the Romans to take advantage and take over. As a province of Rome, it brings peace and structure that leads to a more prosperous period.

After the fall of the Roman empire Crete fell under strong influence of the Byzantine empire and was a period that Christianity spread and more period churches were build. Due to the weakness of the Byzantines the Arabs concurred Crete in 824 and destroyed the capital Gortyna. It were the Arabs that actually founded the city of Heraklion, than called Handakas for the dry moat around the city. Till then Heraklion was a small settlement and called Kastro, indicating it had some kind of fortification. The Byzantine general Nikiforos Fokas re-concurred Crete of the Arabs probably for its importance in slave trade. A new period of growth started as many people from Constantinople settled in Crete. 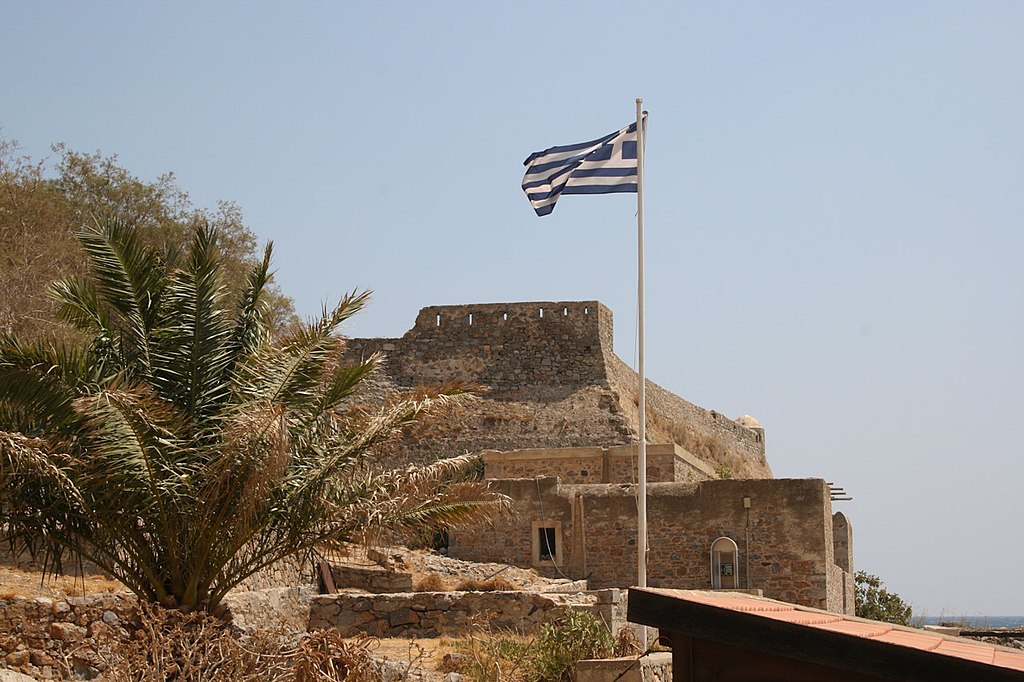 After the fall of the Byzantine empire Crete was given to the Venetians. They renamed Heraklion Candia, a name also used for all of the island and seen on many ancient maps. The Cretans revolted heavily against the Venetians because of the imposition of taxes and their congenital independency. It was only much later during the Venetian period that especially the Cretan aristocrats embraced the Venetians art and literacy. It was a period of great economic and cultural growth and great artists such as El Greco, the famous Cretan painter. In the Venetian period a lot of construction work was done. Fortresses (Grambouse, Rethymnon, Spinalonga), fortifications (walls of Heraklion, then called Candia – city of Chania) and many buildings, churches and aqueducts which are still visible as today.

With the rise of the Ottoman empire, their influence increased and during the Cretan war (1645-1669) the Venetians where pushed out of Crete. In contrary of the Venetians that had built many great structures, the Turks demolished many buildings and it was a harsh period in which the Cretans rebelled intensively. Economy declined rapidly and the population was forced into Islam. The Greek war of independency started in 1821 and Cretan participation was heavy. As mainland Greece became an independent Kingdom from 1932 on, Crete became a province of Egypt which gave the Cretans much freedom. As the Turk took over again in 1841 after winning from the Egyptians, the Cretans continued fighting for their freedom, with the most tragic being the revolt of 1866, which ended to the blowing-up of Arkadi Monastery. This action that killed over 2.000 people started to attract attention from World political leaders. As wars and rebellion continues, it was not until 1898 that the British interfered and freed Crete.

Crete became an independent state with prince George as governor under Ottoman suzerainty but the Turks had to withdraw all their army. But the Cretans wanted to unite with Greece and the politician Elefterios Venizelos, later prime minister of Greece, sent the prince away in 1906. It was in 1913 that the uniting was a fact. During the second world war Crete was concurred by the Germans during a airborne invasion with heavy casualties on both sides. During occupation the Cretans rebelled heavily but had to pay a high price for many Cretans where massacred.

1821-1827 war of independence, republic.
1832 independence of Greece, treaty of Constantinople
1832 king Otto from Bavaria, made Athens the capital
1863 king George I from Denmark
1863 Ionian islands (Britain) and Thessaly (Turks)
Late 19th century, growth population and urbanization especially Athens
1912-1913 Balkan wars lead to acquire Crete, Epirus, Macedonia and Aegean islands by treaty
1947 Rhodes was ceded after WWII by Italians
1914 WWI, king Constantine, pro German, Venizelos – prime minister pro Allies. Venizelos had to leave country
1916 allies make Alexandre, son of Constantine king, return of Venizelos
1919 Greece annexes parts of Turkey by treaty but start Greek-Turkish war which they lost
1922 Treaty of Lausanne gives former parts back to Turkey with large population exchange but the war had brought genocide to thousands of Greeks that lived in Minor Asia, estimations vary from 500.000 to over 1 million. Many also fled to Russia.
1940 WWII, invasion of Italians, later helped by Germans through former Yugoslavia.
1941 Germany invaded Crete with large numbers of paratroopers, heavy casualties on both sides.
Till end WWII strong rebellion by the Greek. Many died (8% of population) by combat, elimination or starvation. Greece left ruined.
1944 – 1949 civil war between government (supported by Allies) and communist troops. Help from allied troops brings civil war to an end. Greece becomes member NATO.
50’s and 60’s growth of economy due to help Marshal plan.
1955 Konstantinos Karamanlis prime minister, plans for growth economy and tourism, membership to EEC and an independent Cyprus. In 1963 he resigned after disputes with the King and lost elections to George Papandreou.
1967 – 1974 Military coup (to ‘prevent’ communist influence from left wing Papandreou) and Junta period Junta of the Colonels or Junta of the Americans (Colonel Papadopoulos, former CIA agent). In 1973 Greek monarchy but another coup that year. Junta was to take Cyprus but Turkish army invaded the island.
1974 New democracy (the King was expelled by referendum for his dual role during the coup) brings Karamanlis back to start Nea Democratia. Also return of Andreas Papandreou who starts PASOK and is prime minister twice. Greece re-joined NATO and EU in 1981.